Here is a story and some images and a little video I got from my four day solo up the Sibun Gorge into the heart of the Belize Jungle.
I took an inflatable Aire Canoe which enabled me to pack it small then pump it up and have a very stable boat to line up river and run the white water back down.
This trip was an amazing. Challenging, rewarding, astonishingly beautiful and it left me wanting more

Day 1
I caught a ride from the office to the Sibun River put in, with the PACZ tours bus on their way back to Teakettle (a small town in Belize). I had been hearing stories of Xateros and how they steal things from people camping in the bush. Xater os are men who illegally collect the Xate palm for florist industry. They can be mischievous and are known to be occasionally Violent. This had me a touch nervous, as well as the stories of man eating Jaguars (though I Know there a very rarely attacks on humans from wild Jaguars) I was mostly nervous as I wanted to see one. 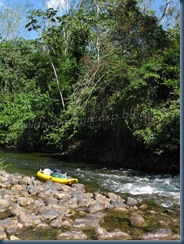 The trip started in agricultural land though by the third rapid and the end of the fourth big pool, I was entering the George and the jungle slipped closer and the signs of humans vanished. The pools where crystal clear and full of fish, and reflected warped impersonations of the large green trees that towered up and over the river. The rapids, slick with green algae and smooth granite boulders, where very frustrating and exhausting to line the boat up. However the pools got larger and longer, so more paddling was possible as I progressed.
I wonderful sandy spit on river left gave me a great first camp for the night. I witnessed Neo tropical Otters feeding right in front of me until they noticed my curious gazes and disappeared with a  splash. 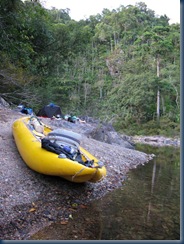 That night I paddled further up stream and searched for what I could see In the Flashlight beam. I found a coffee snake swimming across the river, large water spiders on the banks, and a really big frog about the size of my foot.I ran back down the rapids, lit only by my head lamp, and paddled back towards my tent. Out of the night there came a gentle rumbling on the air. It sounded almost like someone snoring and sent shivers up my spine. I shone the light across the river towards the noise, though nothing was there to announce itself further. Was it the elusive Jaguar?
I slept sound that night; however I did dream of Jaguars drinking hot chocolate outside my tent. 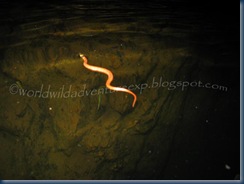 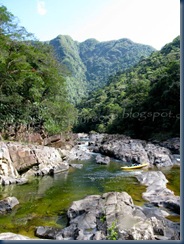 I awoke to the cool tranquil peace of the jungle, as the sun started to sneak over the mountains and flood the gorge with a golden light. I was on the water early and wanting to push as high as I could in the day. As I progressed the river started to resemble a New Zealand west coast river, big granite slabs that create deep pools that the beautiful rapids fill with an ongoing song like noisy gurgle and splash.The Rapids got increasingly larger and harder to portage, requiring me to carry the gear and then the canoe around the rapid, they would be fun to run back down however. 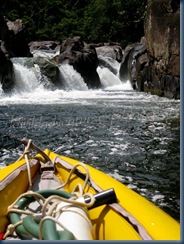 Large fish swam in the waters and I wished I had brought a spear gun, so I could roast one over a fire for dinner. I found a great camp site that evening on a granite slab that stuck out into the river. The wonderful thing about the site was the hot tub in front of the tent. The river diverted into a channel towards my tent slab then ran into a large pot hole, swirled around and flowed back into the main stream. The best thing about the pool was that you could stand in it and the depth was right at neck height for me, a perfect tub. The view up and down the gorge and the jungle covered mountains made this a spectacular camp. 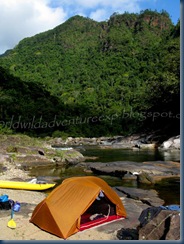 That night I watched the stars while drinking coco nut rum, and then feel asleep, exhausted.The days are hot, and I am struggling to drink enough water, minor dehydration and sun burn are leaving me shattered after such a physical day.


Day 3
i sleep in a bit the next morning, and decided to keep my camp and head up river for the day then boat back down before night. It gave me a great opportunity to travel lighter and push later. I calculated that what I would take me all day to get up would take me about an hour to get back down. 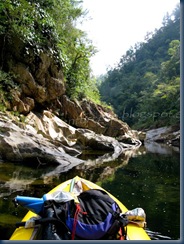 The day was spectacular, some large portages due to tricky and slippery rapids, though I sighted many more otters as well as Toucans, Parrots and signs of Tapir. The side streams where spectacular to explore up as well. Some held deep pools to swim in that had a garden of Eden landscape around them ,as the sun glistened through the emerald backlit leaves and across the water I wanted to live here or at least make my bath tub like this.

My last pool for the day was a beautiful long shallow one, and as I crested up over the rapid and stepped into the boat to paddle forward, I sighted a large black shape swimming away into the shade. “Wow now that is a big fish”! I exclaimed to no one else but me. I followed it into the shade below the tree. Looking into the water I saw the debris at the bottom of the pool get kicked up and a line of bubbles lead of to the bank. As I paddled over looking for the big fish in the water, I happened to scan up across the bank. There on the edge was a big Croc about 8 feet long, I stopped paddling and watched it with wonder, as I glided past the croc exploded into the water and left a stream of bubbles as I swam away. It wasn’t a fish I saw but a big Morlets crocodile. Cool. However after that I couldn’t talk myself into swimming in the deep pools anymore. 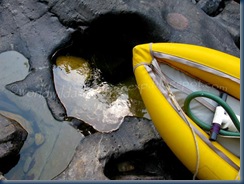 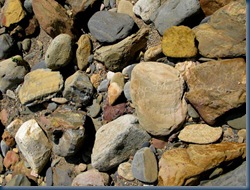 An hour from sunset I turned the canoe and headed down stream. It was great to finally be able to run some of the rapids I had worked hard to get up. The feeling was exhilarating, even though the rapids were not huge, the feeling of being alone in the jungle, makes many simple things feel allot more risky. I arrived back at camp in good time and my camp and gear was still there, the Xateros where not in the mood for mischief today it seems. It took me two hours to come down a relaxed day of upstream travel.


Day 4
On the water by 8 am I enjoyed the ease of the trip out, Running shoots and drops, though I hadn’t brought my helmet so I backed out of a couple of bigger rapids. However the funny thing was that the smaller rapids caused the most issues, catching the boat and flooding it, where it just bounced down the big ones.What a spectacular river. It took me four hours to reverse two days of upstream travel though it was worth it. I wanted more time there was so much more river to see and on the map it splits and then there are two rivers to explore. I promised to return with two weeks’ worth of time and perhaps a Helicopter lift into the fork of the river?
I rolled up the boat and loaded my gear into my pack and sat on the side of the road and tried to wave down he buses travelling along. Eventually the PACZ bus turned up on its way back to Dangriga and I got a ride back with them, telling of course the stories of Xateros and Jaguars. 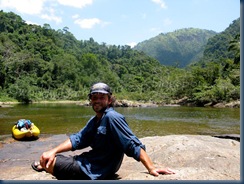