Surge in the Black TRAK. 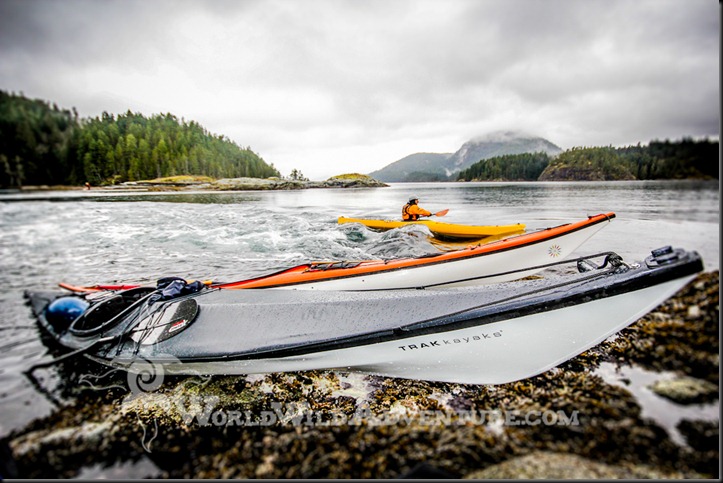 A couple of weeks back, Nolin from TRAK kayaks had returned from the Philippines, where TRAK parts are made, with a New for 2013 BLACK Skin for the TRAK T1600. This skin Meet up with me at the Chicago Boat Show while I was Rep’ing for TRAK there, and Came home with me.

Not only did I get to have a little fun, rolling the boat at show, but now I get to take the skin out for a photo shoot where ever I go, and this past weekend it happened to be a surprise run to Surge Narrows just of Quadra Island in BC. I had about two days notice for the Sunday Flood tide from Local Paddler Alan Dunham, but I was in.
So on Sunday 26th Jan 2013 I woke up at 7am, despite having being out snow shoeing under the full moon till 2am that same morning. I drove up to Campbell river to meet the boys at the Ferry to Campbell river by 9am. There was a good turnout for the fun, Brent, Alan, John, and Brad, I was the youngest of the crowd, but that was awesome, I am highly inspired paddling with active and very able older generation paddlers. There is always so much to learn and you know you are always going to be safe if it happens to be a bad day for you. Thankfully no one was having a bad day, and even Brad, who was having his first visit to Surge, got some rides and slowly learnt to get some good rides. 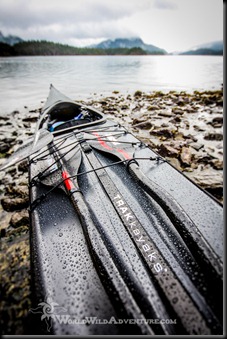 It was a beautiful west coast winter day, you know the ones where it constantly drizzles light rain and there is no wind at all, little dimples all over the glassy water... love it. The current quickly stepped up to 6 and A half Knotts, which gave us a great building wave that soon stood high and deep for what seemed like 4 hours, with about an hour of build up and build down on either end. To begin with some of us played in the rocky features to that back of that wave that through in all sorts of different fun, from holes with piles, “V” waves, large eddies behind rocks. I was having a blast and so was everyone else, and It was great to have a sexy new Black TRAK along for the fun. The other new toy I was enjoying playing with was a Lendal Xrange Ti paddle, from Lendal NA. I had been given this paddle to play with by Lendal and it was fun, It is a great paddle to compete with Werner, it is just as light, has the foam core blades and is a four piece break down (great for Travel), the coolest thing is that it uses Titanium for its locking spigots, making an ultra tough join at all three points, the paddle performed well and was very quick and agile for linking strokes. 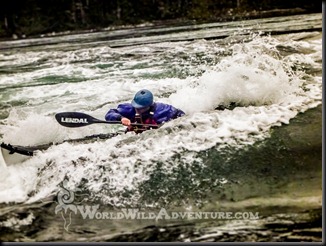 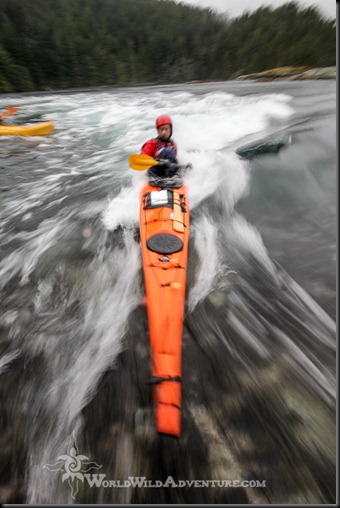 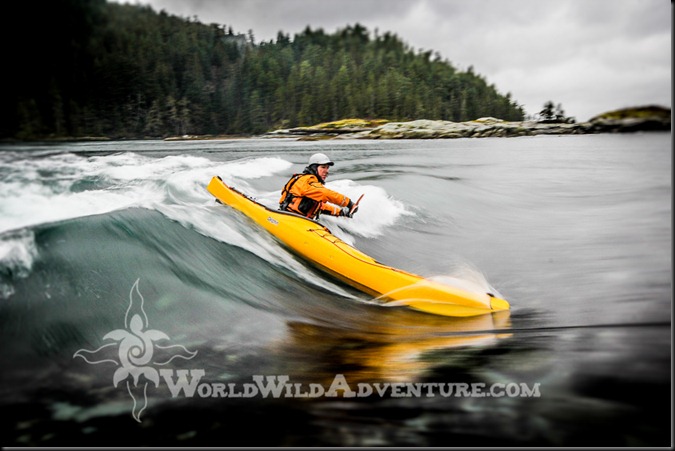 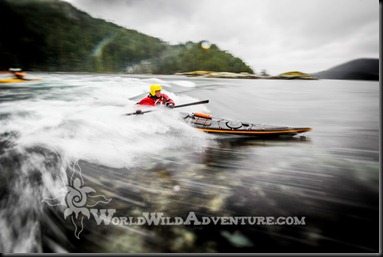 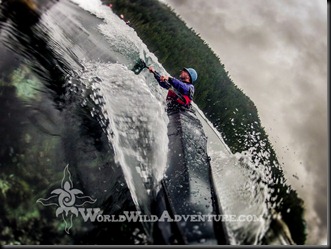 The end of the day seemed to take a long time to come, which is great when you are having to much fun, though with Aching muscles and a killer thirst and hunger, it was time to head back to the cars and get the ferry home.
Thanks Al for thinking of me when you went, and for some great shots of the TRAK and I on the wave.
Check out Al’s trip Reports here http://www.capemudgekayakers.com/ 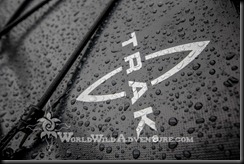 A Short Video From the Grand

James Manke put together this short piece from our Project Grand Canyon Trip.

More to come Later in the year.

On new years day we loaded up our sea kayaks and gear onto a trailer with 5 cross river boats and a OC1 and headed for Flagstaff up the Diamond Creek access road; this would be only on small step in the 4 day journey to get back home to the Pacific Northwest of Canada. We had just finished taking four fully loaded Sea Kayaks down the Grand Canyon on a self supported trip and the whole thing seemed like a dream and still does. 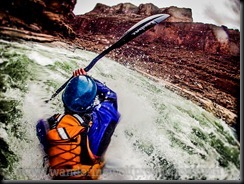 It was certainly a different trip for all (even for those who paddle rivers often), throwing in loaded sea kayaks into the dynamics of the river created some high octane fun and tension the whole way, even when we felt comfortable the long spear like heavy boats, could punch most features with some intent. There were beat downs, Swims, Many Rolls, airborne highs and submerged lows, as well as some great epic fun, challenge and enjoyment in a most amazing place! For those, like James Manke, who this was their first real River trip, the trip was a step learning curve and proved to me that sea kayakers with the right skill set could survive and learn to negotiate a river system, even with a Greenland Paddle!

Everybody is now back in there respective homes and processing thoughts, Images, film and stories so stay tuned for some of that to come over the following months as we aim to share the adventure and eventually get a short film out near the end of the year.
~ Jaime ~

In Decline, Caribou Face a Tough Winter in Canada

Here is some interesting, scary and promising news on the Caribou populations of NE Canada, a place that has become dear to my heart after working up in NW Labrador Fall 2012.
Jaime

It was once our largest caribou herd, and one of the biggest herds of large migratory mammals anywhere in the world.  The George River caribou of northern Quebec and Labrador were surpassed in numbers perhaps only by Africa’s wildebeest. But now their population is perilously small—about 4 percent of its peak. Although migratory caribou, also called reindeer, are known for wide swings in population size, encroachment of industrial development into their habitat puts these animals at increasing risk.
In the late 1940s, the George River caribou herd may have declined to as few as 3,500 animals, and in 1958, a careful census estimated its numbers at 15,000. Historically, when the herd reached these low points, many of the Innu, Cree, and Inuit people, who lived in what is now northern Quebec and Labrador, died from starvation. But the George River caribou herd rebounded with amazing vitality, reaching an astonishing 775,000 animals by 1993, ranging over an area larger than France.
Today it is one of a handful of large terrestrial mammal populations around the world that continues the long-distance migration its ancestors carried out for millennia. In a single year, some of these animals will travel thousands of kilometers across Canada’s boreal forest between their wintering and calving grounds.

Member of the George River caribou herd. Photo courtesy of Valerie Courtois, Canadian Boreal Initiative.
The current decline of the herd is due in part to overgrazing of its summer range, resulting in higher mortality from poor nutrition. By 2001, the herd was at 385,000 animals and continuing to decrease, totaling 75,000 animals in 2010. The most recent survey puts the herd size at fewer than 28,000.
This steep drop forces us to consider whether and how to address the low numbers. The populations tend to rebound after the number of animals foraging in certain areas decreases and the preferred foods grow back. But small numbers create a vulnerability to conditions that could push the population over the edge. As mining and other interests propose development of the same lands that the caribou use for calving and other phases of their life cycle, the animals have fewer places to go. These types of spatial limitations make them more vulnerable to predators. The incursions also make it harder to find areas that are good for foraging and free of mosquitoes and skin-burrowing warble flies that weaken calves and older animals. Add to that the challenges caused by climate change, and a herd at low population size could be at risk of endangerment.
There is some good news for the George River caribou herd, however. The government of Nunatsiavut in northern Labrador recently endorsed a proposal to put a 14,000-square-kilometer (3.5 million-acre) area of George River calving grounds off limits to mineral exploration and other industrial development. Additional sections of the herd’s calving grounds are already protected within the Torngat Mountains National Park and within the George River and Pyramid Mountains interim protected areas. In addition, the Inuit government territories of Nunavik and Nunatsiavut, where the calving grounds are located, are pressing for even more land protections.

Participants of the Innu-led George River summit. Photo courtesy of Valerie Courtois, Canadian Boreal Initiative.
The Innu of Quebec and Labrador have maintained an intimate relationship with the George River caribou for millennia. This summer, an Innu-led organization hosted a gathering of Innu leaders, scientists, and advocates working in partnership with the Pew Environment Group’s boreal protection efforts. They met in an ancient encampment along the George River known as Mushuau-Nipi to discuss ways to blend modern conservation and aboriginal knowledge to achieve healthy caribou populations.  Participants agreed that to ensure recovery of the herd, a 90,000-square-kilometer area in far northeastern Quebec and northwestern Labrador must be protected, including the Nunatsiavut government’s proposed no-development zone.
Let us hope that the leaders of the governments of Quebec and of Newfoundland and Labrador will follow suit and make this region a model of balance between ecological needs and industrial opportunities. The world will be watching to see whether the George River caribou can rebound and continue on their timeless treks across the wide-open spaces of Canada’s north.
Jeff Wells is a science adviser for the Pew Environment Group’s International Boreal Conservation Campaign. He received  a doctorate in ecology and evolutionary biology from Cornell University, where he is a visiting fellow.