The TRAK FIles Episode 4 Part 1 is Out!

This is the beginning of the real meat of the series. First with a journey with gaint sea beasts in
this episode, which explores British Columbia Canada, and then int the tropical wilds of Isla Coiba, Pnama, in the coming part 2.

I hope you enjoy this episode as much as we enjoyed being on and filming the adventures.

Feb 1st 2012: Bugs, Bugs Everywhere and not a Hermit Crab in Site 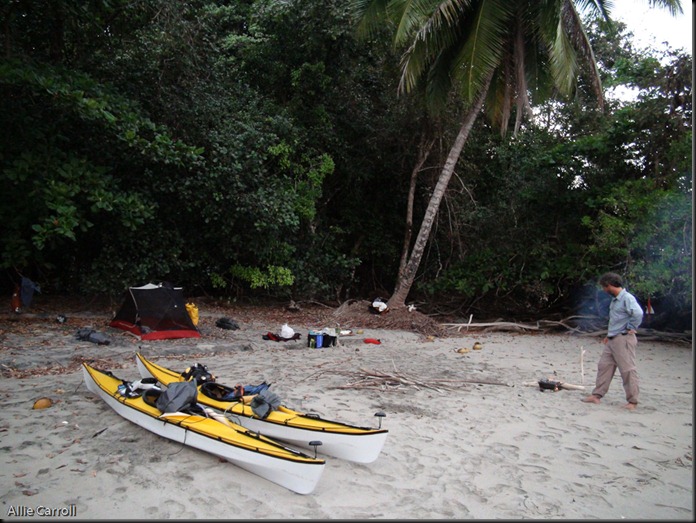 Sunny Hot Light breeze from the E for the morning none in the afternoon.

Dinner: Pizza Baked in the Dutch oven over the fire

When I was a kid I used to go to the rock pools at low tide on the beach and look for critters. I would find the usual ensemble; Anemones, Blennies, Crabs, Limpets, Chitons, Small fish; occasionally I would stumble across something unusual like an octopus……… Today at lunch, I took Allie to see some bats I had found in a small coastal cave, on the walk back meandering through the rock pools I stood next to one pool full of sand, my toes hanging over the edge near the water. I focused past my feet and on to the shape mixed into the sand submerged in crystal clear water…………… A CROC lay there! Wow what a great surprise, here was a 3 and a half foot croc, staying dead still hoping I wouldn’t notice it, and it remained there the full 3 hours while we had our lunch on that beach, quite a bit different than your average rock pool specimens. “Gotta love Coiba!” 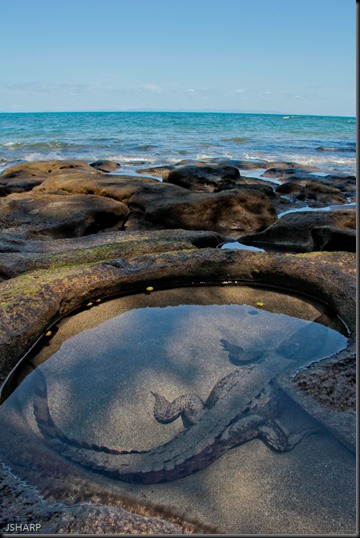 This morning we were up late as my alarm didn’t go off, then to top it off, Allie discovered the Hermit crabs had found the pre made Breakfast ( just needing hot water this morning) tipped it out and eaten it all. Allie was not impressed, she had been complaining about them as it was, and was sick of the ground constantly moving and the leaf litter rustling with their constant search for food, and this act just topped it off. I thought it all a bit funny, one because Allie hadn’t thought to secure the food in a more inaccessible place; and secondly because I had been feeling guilty about all the hermit crab lives we had been taking in order to catch fish; and thought it appropriate they seek some payment, thus I was happy they hadn’t attempted to eat us in our sleep. 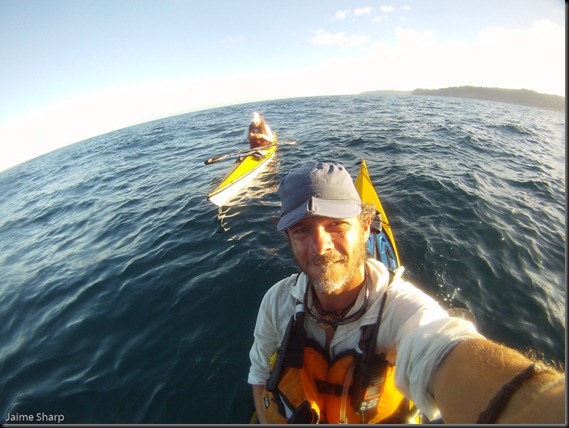 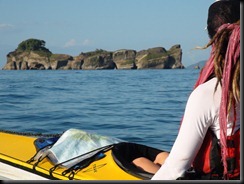 On the water, we made good time despite our late start, and rounded the SE point at about 11.30am, there was a good E wind blowing which brought a good size fetch and made the sea very messy and lumpy around the point, this made for some fun for me and a bit of anxiety for 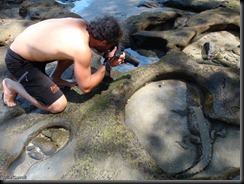 Allie. We survived though and Allie even gave a poor shark a fright as she came cresting over a wave and slamming down right in front of him, the spooked fish disappeared in the blink of an eye. By 12.30pm my back was aching and I had rubbed some patches raw on my lower back, so I was happy to pull in for lunch, have a picture session with a rock pool Crocodile, a snooze and a taping of my open wounds before continuing on for the afternoon. 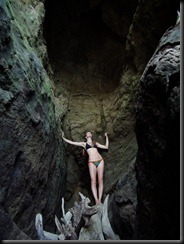 Come 3pm we pushed on for some more distance, the seas were now oily flat; we were gazing across now at the mainland and not the open Equatorial Pacific Ocean. Eventually we found a good place to camp, pulled up, ran around looking for firewood, then realized how bad the bugs where. For the first time in our 7 days around the island the sand flies where incessant, frustratingly so, we had to stand in the smoke of the fire to try and get away from them. The one bonus for Allie however was that, strangely, there were NO hermit crabs on this beach; one plus and one minus, I think Allie would take the hermits over the bitters any day if she had the choice. We fall asleep salty and scratchy (no fresh water at this camp site to bath in) to howler monkeys roaring in the trees behind us and the soft lapping of the incoming sea as we lay hidden from the bugs in the bug screen tent. Finally some unglamorous camping, despite the fact that we made fresh pizza on the camp fire and had a glass of red wine as we watched the sunset, while wearing lots of bug spray.

I personally believe this is a crap situation considering the politics of the reason this is occurring! I was looking at bringing a group of 16 school kids to Costa Rica(CR) to run an "Educational Adventure Trip" based on marine conservation. The trip and others like it would bring thousands of dollars into the country and promote CR and its Green Image. Now I am not so sure that CR is the place for such a program.

I no longer wish to support this country (CR) if it promotes Shark-Fining and imprisoning Paul Watson for acts done in Guatemala (of all places) in the name of conservation and sustainable fishing. Read the article below yourself and make your decision on the situation.

I believe Germany should get it's nose out of this and set Paul Watson free, and CR should BAN shark-fining, and support anti poaching!

Photo by John: Flickr
Toronto-born animal activist, star of the reality show Whale Wars, and founder of the Sea Shepherd Conservation Society, Paul Watson is currently being detained by German officials as he faces possible extradition to Costa Rica on the basis of a 2002 maritime violation. Watson was arrested this past weekend at the Frankfurt International Airport due to the 10-year-old Costa Rican warrant, and should learn tomorrow whether or not he’ll be extradited at the country’s request.
According to a statement from Watson posted on the Sea Shepherd website, the “extradition request was in reference to a complaint from Costa Rican fishermen who I caught poaching in Guatemalan waters. The fishermen were not injured and their boat was not damaged… Interpol originally denied this extradition order and deemed it as politically motivated.”
Sea Shepherd maintains that Watson cannot possibly hope to have a fair trial in Costa Rica, where the country’s illegal shark-fining mafia could also try to do him personal harm. The environmental group is calling on the German government to dismiss the case and deny the extradition request. They have set up a donation form for the Free Paul Watson fund, which will help support the legal defense and public education. They also ask supporters to appeal directly to the German Ministry of Justice, and ask them to deny the extradition request.

Posted by Jaime Sharp No comments:
Email ThisBlogThis!Share to TwitterShare to FacebookShare to Pinterest

I am loaded up with 3 TRAK kayaks, one has custom white water thigh braces that where made for Ken Whiting when he ran the Ottawa river a couple of years back. This should improve the surf play abilities and the river running abilities of the TRAK, I will test it out in the coming week during a 6 day raft supported Journey Down the Salmon River in Idaho………….IF I GET THERE! 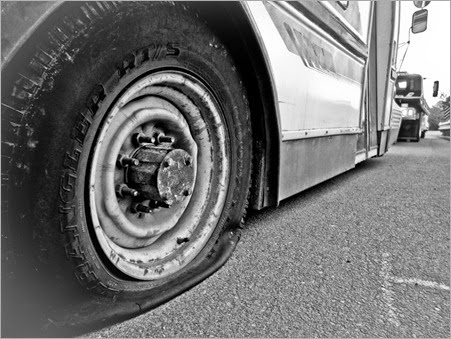 The bus is loaded up and I am now stuck in the car park f Goodyear Tires just south of the border, as I got a flat tire and I do not have a jack or spare ( I am still figuring out what i need for this strange vehicle). thankfully I have CAA and they towed the van for me here for free last night. 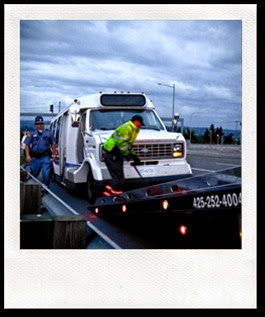 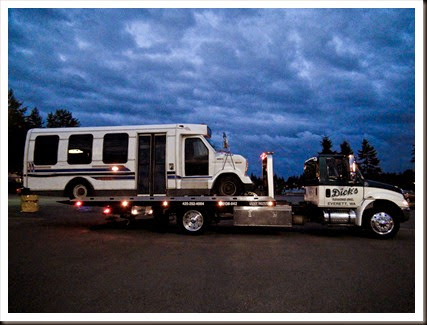 I slept in the bus in the car park and now I am getting a new tire fitted as the old one exploded. $200 USD later I will be on the road with a day and a half to get to Stanley Idaho, which is about a 12 hour drive still. Ahhhh! the adventures continue with the bus. I am little stressed, hopefully she (the bus) will get me to the river and back?

The goal of the rest of the  TRIP is to Head to Tahoe after the Salmon River, do some Filming there for TRAK Files, then heada out to the Coast and paddle and explore the coast back up to BC before the end of the month. We will see if this happens I hope the Bus does not let me down.