September 8th: Were The River Flows; A 2nd Return from the Grand Canyon.

3 days ago I, Along with 15 other individuals stepped off four rafts onto the muddy shores of the Colorado River at Pearce ferry Arizona. Over the last 16 days we had traveled 280 miles through the Grand Canyon following were the river flows and now our fantastic journey was at an end. It had been a journey of dynamics, dynamics of people from all over the world who were mostly strangers to each other brought together by their common friendship with me and a sense of adventure. It was a trip also of dynamics of water, traveling a rocky passage carved by the river, Rain in the desert, rapids, hydraulics and currents of a chocolate and monsoon swollen Colorado river; river travel also being a stranger to some on the trip. This trip was about discovery and exploration, following in the footsteps of a rich history of exploratory pioneers, traveling one of the mightiest rivers in the Americas which for many was a trip of a lifetime, for some it was a return journey, and for a number, it seeded the desire to return. 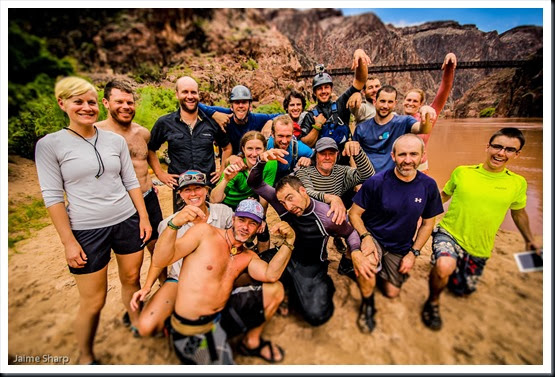 We experienced colours, Red in the desert heat, Blue around the scorching sun, Gold of Rattle Snake Scales, white of the water falls hidden up side canyons, Black of the Rain clouds illuminated by lightening and Brown of the earth filled waters of flash floods after torrential down pours. Ringtail Cats raided our camps at night, scorpions scurried about in the dark and stung a few, Waterfalls erupted from high cliffs and just as quickly disappeared as the rains stopped. In between the sun came and went, but there was always the river. The river of the color red (Rio Colorado) was our path and was often veracious and often tranquil, though always a place of comfort and fear as it lead us through the deep walls of the Grand Canyon where Huge rapids raged and glassy meanders calmed. Through the river we traveled, we swam, we played and we grew. Rafts and Kayaks surfed, flipped and charged lines through the white water (though more aptly named brown water on this trip), often we were left more dirty from the water washing over us than if we had rolled in the sand itself, and sometimes the side creeks cleansed us fresh. 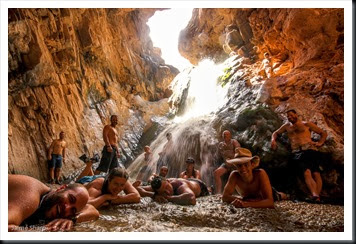 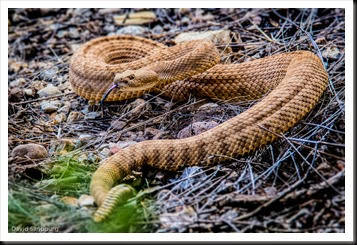 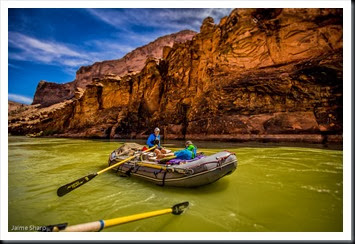 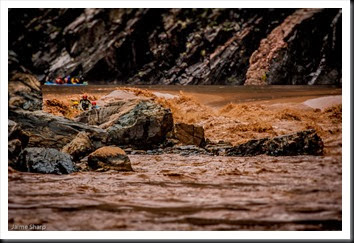 Ultimately this was an amazing trip that none would forget, and as we drifted the last night through, sleeping, singing, dancing and drinking on our four rafts strapped together (kayaks stacked on the back), beneath the sublime stars and the last 40 miles of Canyon walls, we reminisced in glory of journey and in sorrow of end and all was right. When the next day’s sun gradually found us, we were quite and sober, relishing such a 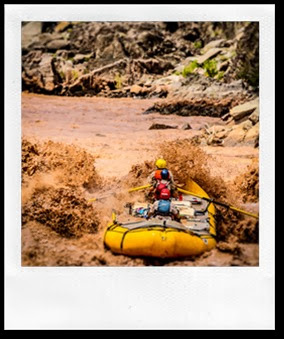 poetic end to a Grand Journey. For me this was a dream come true, to have shared this experience with some special people I have meet throughout my life and journeys of the world, though also largely because my dad came along, and all got to share in what I am passionate about.... life and adventure. 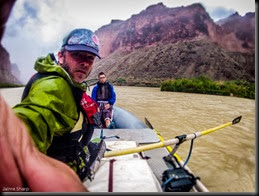 Camped at put in after rigging rafts

I slept on raft. light showers that night had me with umbrella over me for shelter. 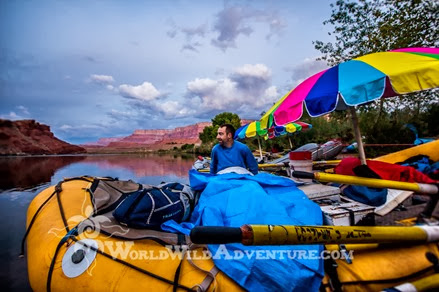 Quick intro to kit and kitchen from Raft outfitter.

Group did great, such an awesome mix of peeps. Strong up river wind in afternoon had to camp early.

Slept on Raft, Heavy rain shower that night ( sleeping on boat was wet) 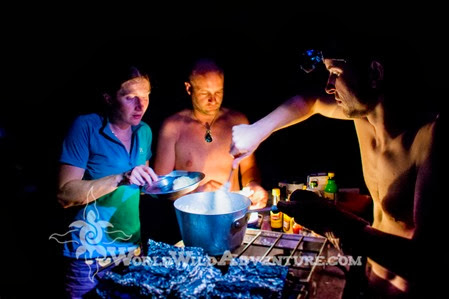 Overcast afternoon (nice and cool)At house rock everyone ran there own boats, stu, Kyle , Bruce (whom swam half way through ) and myself . Was a good rush. Nathan ran Duckie  solo all day swam 3'Times

And many others gave there hand. Motor raft group stole our site at 29mile so had to push on. Played guitar that night

Got raided by ring tail possums that night, all around kitchen and got into fruit on the rafts. Not much sleep for most of us, i Slept on Raft again 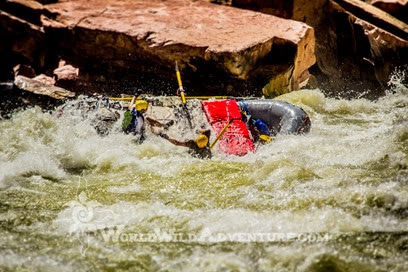 Stopped at a number of sites, nautilus canyon, red wall cavern , natural bridge. Flat days paddle of 14 miles. I kayaked in Jackson rock star, and swam playing around as I couldn't get my hand roll IN it. Had some fun.

Pulled into an awesome site for camp, Kayaked in a ok play hole, others went hiking, great salmon dinner Slept on Raft. 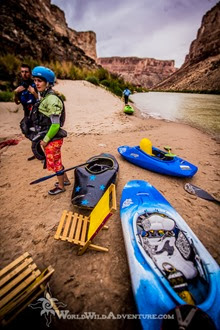 Slept in raft under tent fly though ended up being Clear sky's for a first night, over cast and cool warm all day. Morning yoga then walk up Canyon. Rafted 6 miles to canyon for water fall hike and lunch. Beautiful waterfall  3 naked men swimming. Lunch then on the water to little Nankoweap camp. Drinks in raft in sun then ribeye steak BBQ and no bake cheese cake 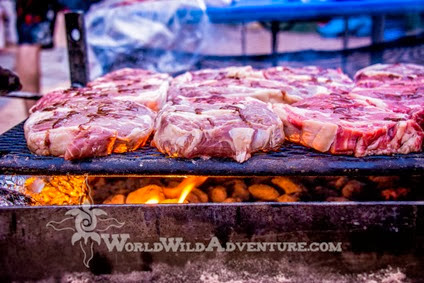 Rain all day and a 12 mile day

Fun day though near end raft got stuck in a sleeper hole and Kelly and ken got kicked around and then swam. Rest of run was wet and cold, though we were not far from camp. Had a night under the tarp drinking smoking cigars and playing music on iPhones over little speaker.

Slept in my tent for the first time 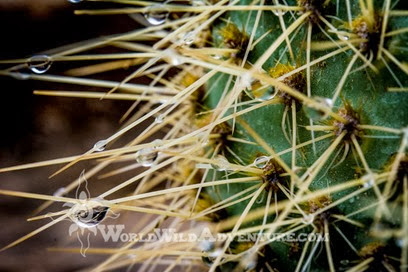 Finally into the Grand Canyon proper. Had a load of 7,s and our first 8 (Hance Rapid). Good fun big rapids, really worked me hard on the raft though got all the lines I wanted. At our camp was a fun little play wave for kayaking on. Rained most of day and all off night. Great dinner everyone exhausted. Got raided by ringtails again. slept in my tent again 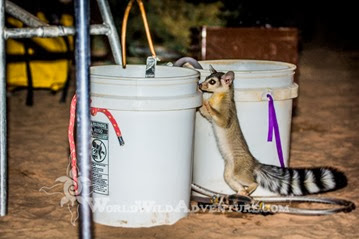 I awoke to river levels up higher than usual, despite the dam control of the grand, due to side wash water feeding. I camped lower than everyone else and awoke to  the closest peg to the water on My tents being in the water

Today was the big water rapid run, granite, hermit and crystal. I ran the first two in the TRAK and walked back up to run the raft down, I got the TRAK airborne in granite, nailed the big wave on hermit then rolled , the raft line was messy on hermit we hit the two big waves side ways, though every one made it through  . Crystal had the TRAK packed on the back and I pushed the raft through it. Ryan got his raft stuck on the shallows after the rapid, took a while to get it off.

In the afternoon we had heavy ran at camp but then cleared and dried our gear .  Guitar songs that night

I slept in tent. 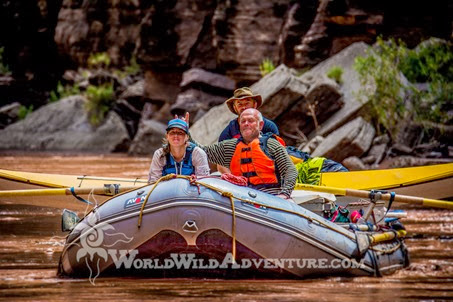 Paddled the TRAK  all day, dad did well pushing the raft, had a great couple of walks up to a waterfall and then to elves chasm. No rapids over 7, dad ran them all. 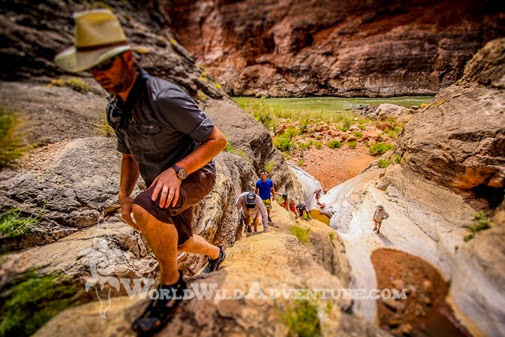 Played guitar in black creek slot canyon in the morning, amazing acoustics, I wished I recorded the song we came up with while in there.  In TRAK all day again. Good small rapids fun day. 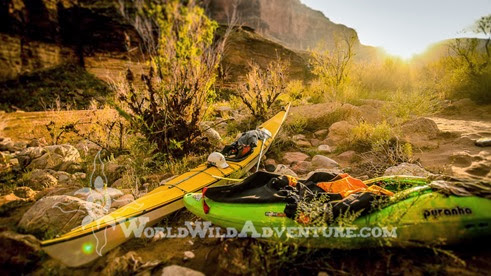 In TRAK stopped for lunch and hike at deer creek. Camped with another group at a late camp site.  we had Bootie shots that night for all the swimmers so far,  I went to sleep on a flat rock, then had to leave because of ants, so slept on raft then a heavy rain storm came in the night and i had to scramble to set up tent on before mentioned large flat rock. 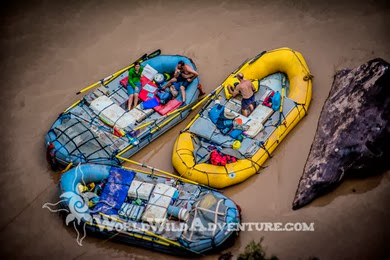 In raft all day with TRAK slung across back of raft. River chock full of crap and wood. Good camp spot, and afternoon rain. slept in tent. 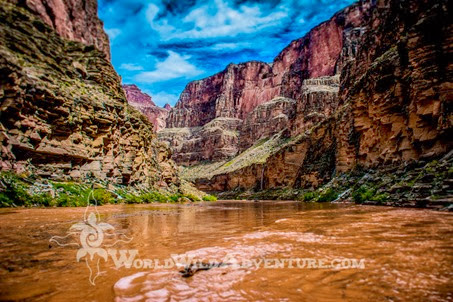 Today we hit LAVA FALLS, sunny day, packed up camp went up side canyon for morning explore, then paddle 16 miles to lava, ran in kayaks first(TRAK down guts) all went well. Kyle ran first raft hit line sweet, Ryan next flipped at top, eventually after prepping rafts for flips, Bruce and I ran our rafts, Bruce got almost all The way though rapid and then flipped on bottom wave, I fortunately nailed The line. RE Flipped rafts down stream, paddled to camp late no lunch. Great camp bootie shots  Awesome stars in sky.

Slept in my tent 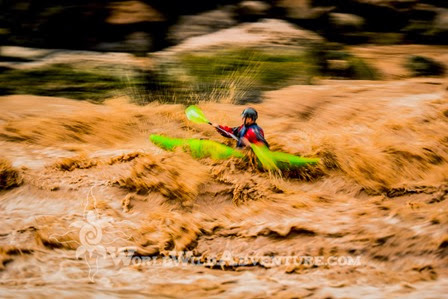 flat water float stopped at petroglyphs for lunch. Super hot day. Floated and drank beer, meet other rafters shared stories of lava falls fun. My solar charger started playing up.. Nice camp by 4.30 (perralgry?) snoozed on raft and Awoke to practical joke of me floating down stream with ken yelling help, help boat afloat. I rowed back in a dazed surprise to find everyone hiding and taking photos, quite funny; they had me tied to a long line and I had been floating out there for a while before they had woken me up.'it even took 8 people to slide my raft off the beach without waking me.' 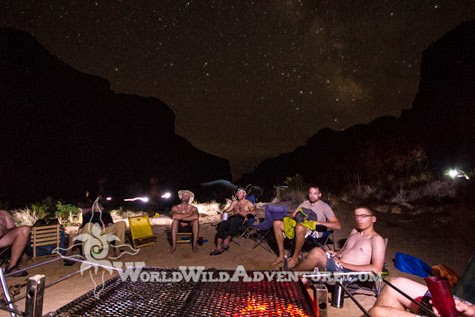 Meet up with other raft groups, had a social float with slip in slides, rock jumps, beer trade for Tabaco, and then an awesome camp. That night we gate crashed the commercial operators a camp up from us. We ran in in with leprechauns outfits and it turned out t be “strip botchi ball”  game called “debauchery ball”, with young female raft guides half naked, there were a few men naked too including a bunch of us by the end of it. Then after some naked hugs we said good night.

It was a great night to sleep on the raft. Relaxed morning simple breakfast, nice time by the river, finally the group seems to be relaxing though some issues with some. We said hi, bye to the girls from last night as they floated by. The. We headed off down river. A few rapids then we hit the diamond creek take out, said hi to the American cool dudes and dudetes we had Been jumping of shit with, they gave us their left over rum and gin. And the girls from last nights debauchery  also said goodbye again.

From there we visited and swam at travertine creek, what stunning spot . After lunch we pushed on, then on the first big rated 5 rapid Bruce Jon and Fiona got flipped out of the raft again, in a sticky hole at the bottom. it was a quick rescue with Bruce the only one that got separated from the raft.

We struggled against the wind for a while as it blow up river and then paddled some other solid mid grade rapids. It is exciting to explore a new part if the canyon from our last trip down here.

that night was our highlight, we Had an amazing night float, bouncing off rocks, drinking laughing sleeping through the last 40 miles of river, while the dark canyon walls whizzed past us framing the night sky. 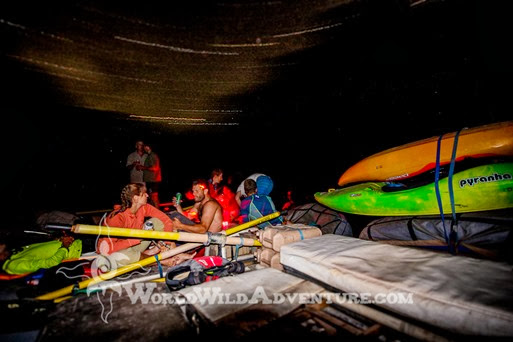 Awoke to a stunning morning on the last piece of the canyon, too soon the sun was on us and.it was hot. Ran behind schedule on float time, took 14 hours instead of 12 for the last 40 miles. Pulled out at Pearce ferry at 11am.

then we where in Flagstaff reloading gear into cars and heading to our Backpackers and out for dinner and a night of drinking and rock and roll bands. 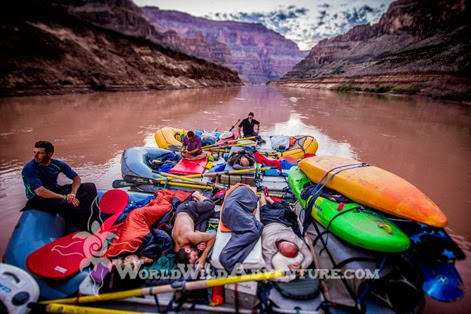 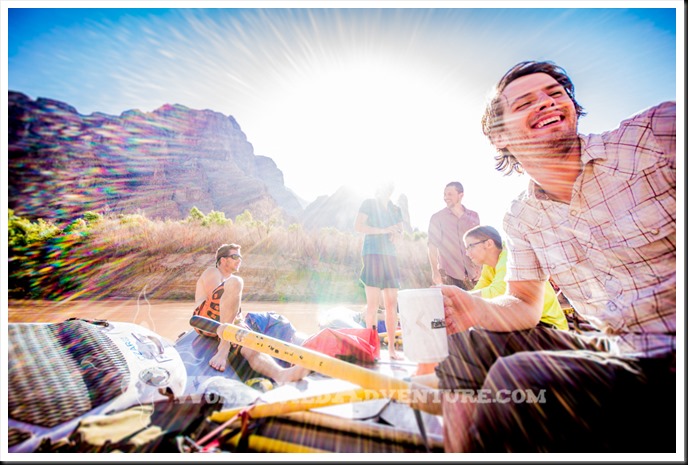