Spring Back into Life in BC (Part 1)

The New Zealand Yak About Adventure is over though the Yak About continues as always in my life, it is wonderful to be back in BC and spring is just arriving, there is still snow on the mountains and the nights are cold, though the days are sunny and getting warmer, while the tree’s bud and flowers are starting to bloom.
It has been a busy year so far, many wonderful adventures and some financial risk, I am now out of money and it is time to work (which still involves kayaking a lot) and fit in finishing film projects where I can. Though the great thing on the island here is, spring means snow melt, and snow melt means…..RIVERS!
I am ashamed to say I have lived on this Island for Ten years and I have paddled only 2 rivers here… this spring I finally connected with the local crew in Nanaimo and we hit some of the most awesome river runs on this planet, it almost brings me to tears to realise I have been missing these magic rivers and these great people over the last ten years. My list of Island Rivers has now gone from the Cowichan River and the Middle Puntledge, to the Upper and Middle Gordon River, the middle Oyster River, Cameron Creek, The Middle Ash and the Upper Puntledge. And there is so much more to get amongst out here, the sad thing is the snow base is really low and the rivers are drying up quickly, so Island boating won’t last long.

Spring is also a great time to get out camping in sea kayaks, the weather is calm and there are not many people out on the water yet. My friend Mark Bardsley from the UK turned up this month with a weeks’ notice, and I happened to be around, he arrived just in time for my Birthday, which culminated in a rag tag crew from all over enjoying a seafood BBQ, whiskey and drinks around a Bonfire. Then on the actually day of my birth, we spent out on Quadra Island Surfing sea kayaks at Surge Narrows. It was fun to get Mark out to one of the well known BC tidal Races and he was loving the experience, even if he did get eaten a lot… though he never did swim (as usual the TRAK Seeker loved surfing the foam of the feature). After a great day surfing at surge (that took me two days to recover from because I was so sore) and a week of work I then dragged Mark off to the mainland for the Vancouver White Water Festival which he thoroughly enjoyed, despite getting trashed in my play boat so bad on one run that he took a hit to the head that cracked my helmet I leant him. Despite this Mark had an amazing time in BC, for his last week here I set him up with a yellow TRAK Seeker Folding Kayak and he headed out for a solo trip into the Broughton Archipelago. 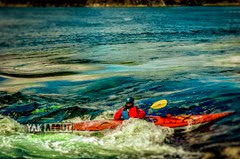 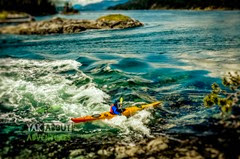 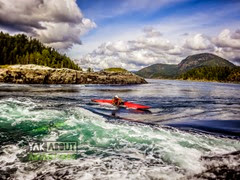 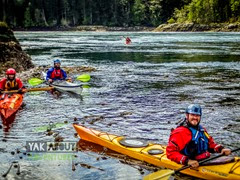 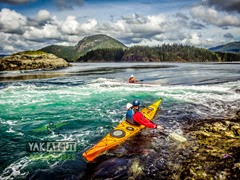 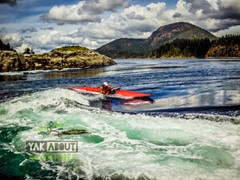 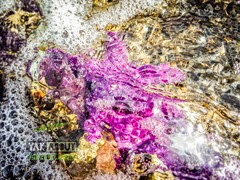 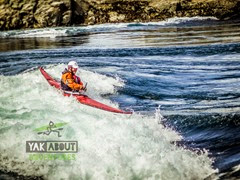 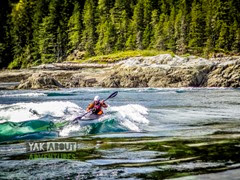 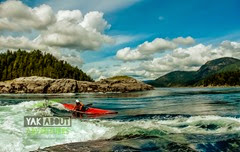 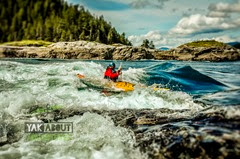 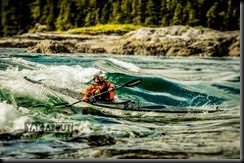 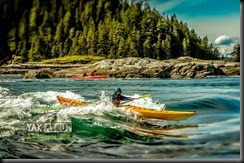 Here are some more highlights from the rivers and Oceans of Aprils adventures.
Oyster River
After a great night of Playing Kayak Polo at the pool in Campbell River I connected with some fun Characters to paddle the Oyster, it is only a class 3 run, though it was great to get on the water, despite the snow on the banks and my hands being frozen in the river. There was a lot to play with on the river and it was fun to be back in my LL “Stomper” Kayak.
The Gordon River
This river has wonderfully step gradient and features, this tight gorge cuts its way through the western part of the Cowichan Area, and it is classic beautiful low volume step creeking at it best. This was a fun run for me as I trusted the Crew I was with comprising of Joe Box and Shayne Vollemers and we read and ran almost the whole river (which is a class 4/4+ run) these guys new the river so well, that they could talk me through the line, lead it and I just followed. This was a surreal feeling on some drops that where significant waterfalls… that feeling of running bind of a drop you simply have been given a description too is indescribable as you crest the lip and plant your blade for a last drive or dive. I must admit I certainly did not style the run though it was super addictive and I was sad this would probably be the last run for the year before it dried up.

Bellinas Islands
These islands located of the coast of Nanoose bay, are a beautiful and remote spot, two island jammed together make a wonderfully sheltered channel with a large crescent pebble beach. My Friend Sam and I set up a couple of TRAK Seeker folding Kayaks and paddled out there for the night. Sam was training for a kayak race and this was a great way to get her on the water and help her with her technique. Also in the island channel was a haul out of California Sea Lions, whose ruckus barks kept us company during the day hours though thankfully silenced at night.
The next day was a stormy one despite the calm sunny morn, on the paddle back we had lumpy quartering sea’s that made the going a touch tough, however when we turned into Nanoose bay it was out our back and we could skim along the waves back to our launch spot.

The Cameron River
This is certainly another classic, a tight technical creek with loads of flowing fun moves that you can run down in 15 minutes, or meander in 45 mins. Multiple runs are obviously possible, though the take out involves a very steep climb and gets the legs working as well. This run I did with a great crew, again lead by Shayne (the local drive and knowledge for Island Boating) and included Corey May, and an old acquaintance Dave Prothero, and for this run we had the wonderful Mark who was happy to drive our Shuttle (any excuse to drive a large American Ford Truck that’s running on Veg’ Oil).

The Ash River
Again with Mark as Shuttle Driver, Shayne, I, and a wonderful Woman called Toni, hit the Lower Ash after work during the week. This was a simple class 3 run, though has a solid Class 4/5 waterfall right at the start that you portage around. This was a pleasant run and I was stoked to be out on the water, though to be honest I was not feeling it that day, and I screwed up a lot of simple lines, though just being on the water, the homebrew Cider of Toni’s at the take out and a late night Feed of Subway in Port Alberni, made the trip a good one.

Vancouver White Water Festival.
This was a fun Social Event and Mark, Cody and I all piled into my Yak’n Wagon and headed to this mainland event. I got to meet a bunch of new people and catch up with older acquaintances. The rains and snow melt had the river up, and compared to last year when I paddled this stretch with Jimmy Mcdonald and it seemed like a bit of a bore, this time round the Canyon run, was good solid class 3+ fun, solid holes, large wave trains and of course great people. Slussy Creek was another fun class 3 run at high flow. It was a wet Raining weekend, and we had a great live band to dance away to under a giant Rain fly and at 1am we found ourselves sliding of to bed.
Other highlights for me where, Meeting Steven Wright and doing a freestyle clinic with him, I was amazed at how much I learnt from him and how much can apply across to rough water sea kayaking, I even got my stern stall sussed finally. Another was meeting up with the Jackson Kayaks crew and having dinner with them on the last night. From this meeting I organized to get hold of the new Jackson Karma RG for a few test runs, and so I can give some feedback on the design.

Spring is an awesome time in BC, in fact all year is! I love this place.
Stay tuned for more in the next Post, when I hit some steep creeks in long boats, with Tara Mulvaney (first woman to paddle around all of New Zealand).

sourced from my Yak About Adventures Project Blog here