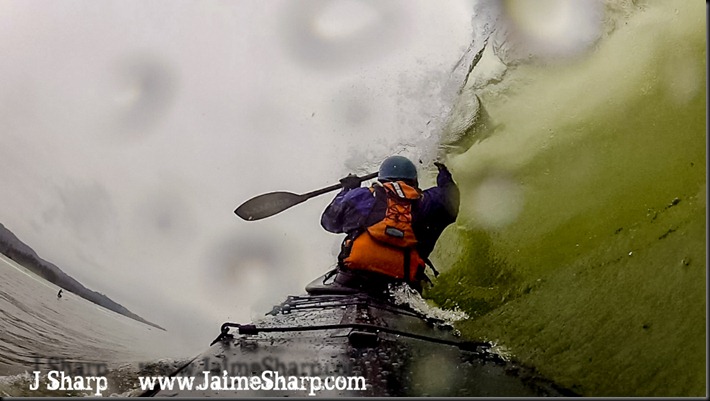 It was the start of the week and with a nice twist of luck I needed to do some filming for TRAK Kayaks and the surf was up at Jordan River near Victoria in BC Canada. So loading up the folding boats into the back of the truck I drove down island to meet James Manke at the campsite on the beach. Pulling in at 11pm after a two and a half hour drive I set up my tent by Manke’s Camper Van woke him up for a bit of a chat, then hit the sleeping bag. 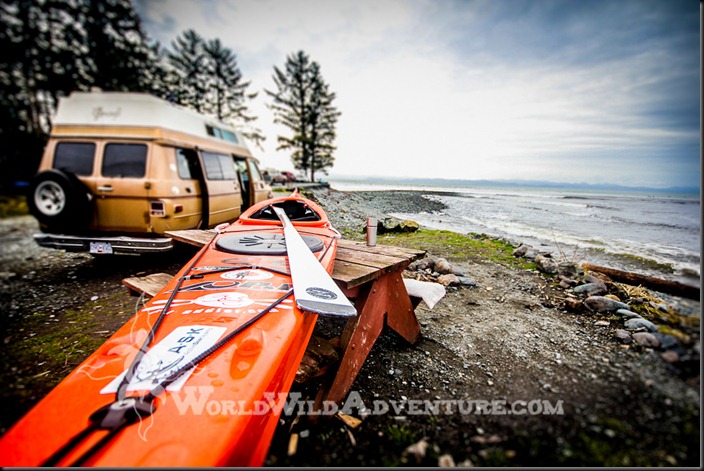 We awoke to a ripple, but bye lunch time there were some solid sets coming through and the surfers were turning up. The large sets (forecast was saying 8-9 foot swell) had a face of about 8 feet, but were fast at closing out and reasonably heavy, this made the rides in long boats short step and thumpy. if you didn’t get off in time. In one instance I took good beat down by a wave that broke on me as I turned to work my way back out. This beat down put some good stress on the TRAK and I ended up with a bent frame, though couldn’t see it until I got out at the end of the session. The bent frame did not stop me from surfing and I continued for another hour or two, though got very frustrated by the fact the boat would turn right on the wave and would not come back to the left unless I almost broke the paddle pulling it back. ( if you are interested in the TRAK Kayak more 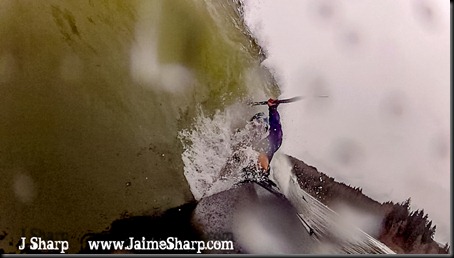 and how the Frame of a kayak could be bent check out the TRAK website www.rethinkkayak.com).  I was surfing with a Lendal Rebel White Water Paddle that we had taken on the Grand Canyon. It was a short paddle about 193 cm and I had some fun with its quick cadence and he big blade face, though Ultimatley I was missing the reach and mechanical torque of the 210cm Lendal Kenitik touring paddle or my Greenland paddle. Though it is always fun to mix up the paddles some time to keep the brain alert and to discover new nuances in boat and paddle control.

As the day progressed the swell became smaller and more predictable as the tide turned and James, Gerhardt and I surfed the closer break for some smaller though longer rides. At JR the outer break will reform in closer and often create a nice predictable point break into the river mouth, however out back the waves are more committing and often very punishing, which Day two came to show us.

Costain Leonard and Kate Hives turned up, the morning had been similar small waves, that slowly built with the rising tide, soon there where huge fast breaks running right across the river mouth and around the point to the next beach and board surfers where getting some amazing long and huge rides. There was still a great 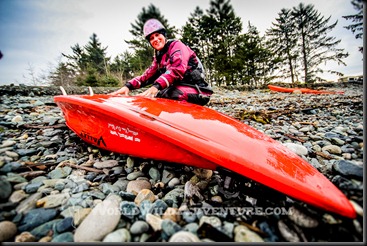 inner break great for Long boat surfing however out back the face height was pushing 13 -14ft in some sets, and was not a place for a long boat to play on this day. However Kate headed out in an HP Surf kayak, got some fun runs and some major beat downs, the last and final one had her limping back to shore with a swamped boat and all the fins broken off after a huge wave broke on her and took the boat to the bottom. I also took the folding TRAK Kayak out the back a bit (after straightening the Frame again) to try my luck with pushing through the big stuff, this day I was also using a laminated wooden Greenland Paddle by VIPPaddles,  I ended up with some good air of the back of the first big wave, and then a good beat down from the third. With no way to surf the step faces effectively, and a good possibility I would bend the frame of the TRAK again, I worked my way back in, To surf the inner break for some fun rides with Costain, James and Kate (who was now in her long boat). We were also joined by Taver and Kelly who came out in their Delphins. It was a fun day surfing with a big crew, and there were some good beat downs, some swims and tolerable amount of gear breakage to equal that we were pushing some limits though in a reasonably safe way.

Thanks everyone for a great day, and to those wanting to get into kayak surfing some more, please don’t surf alone, Learn surf etiquette thoroughly, develop your skills slowly and don’t surf near surfers, SUP’ers or any other water users until you know how to control your boat safely.

Check out this great link for more info on surf etiquette. http://tsunamirangers.com/2011/08/15/surf-kayaking-etiquette/