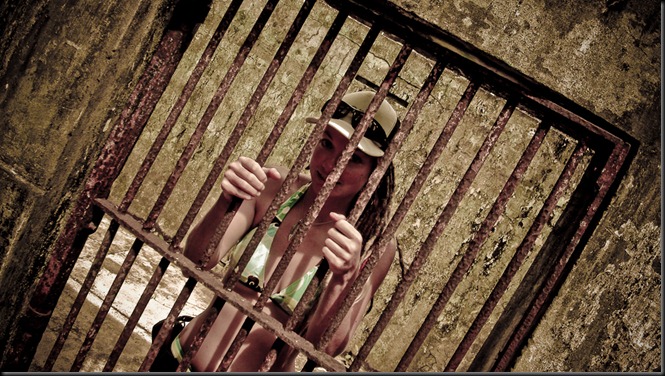 Weather: Over Cast, Cooler than previous days then becoming sunny and hot in the evening.

Awake in the dark this morning, hoping to beat the heat and the biting bugs, we were quickly out the zippered doors of the tent, cooking oatmeal, packing boats, eating and leaving. Paddling in the early morning light we headed for the arcing stretch of water that is the Bahia Damas, it is a shallow sandy bay edged by a lot of scrubby trees, marshland and estuarys; we chose to cut across most of it, bouncing from our camp point to the point across the way, 5 knm across the Bahia towards the Old Penatenciaria (Prison) of Coiba. 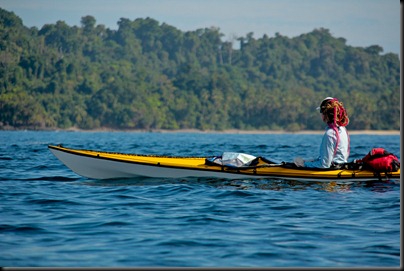 This prison is the only highly developed area of Coiba and has a slightly notorious past and is also the reason Coiba island never fully got developed and used by people. In the bay a Large turtle swam up to me an circled my boat curiously underwater as I sat and waited for Allie, a few moments later it was also the place Allie and I came to heated discussion about communication and her getting left to far behind some times. Right before we could properly bring closure to the heated discussion (or perhaps a blessing to break the stale mate), a boat came whizzing and bouncing towards us from the prison. In the black military looking vessel were three men, the captain had a stern face and a military vest, the other two wore black balaclavas one of whom held an M16 military rifle. 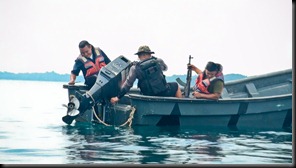 The guys idled up to us and on realizing what we were (kayakers) and that we were just a couple of crazy gringos, the balaclava’s came off, awkward Spanish was exchanged and our story was curiously gobbled up with amazement and statements of “Moy Leho” (very Far) and “Mucho Sharks”. Realizing we were not a threat, the guys bid us come visit the old prison and once they got there boat started again (an embarrassing moment of power) roared off with a wave as we paddled on. 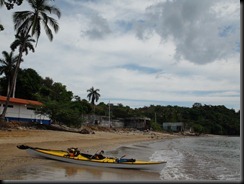 Pulling our boats up on the beach in front of the unused prison, it wasn’t the neglected ruins of a bye gone era we expected. Yes there were some old decrepit buildings, though most had a glossy new paint job and brand new roofs, one block of cells was all set up with lights….. this place was fully operational it seemed. One of the officers who was stationed at the area came down and gave us a tour in Spanish. We came too discover the government was using the place as a central out post for Drug smuggling enforcement and initial containment of offenders. At the moment there were 2 shifts of 6 officers at 14 days on and 14 off; we assumed the number of officers would increase once this shiny new compound was fully operational again (in another month we partly understood). Thanking the guys for their time and after perusing a chart of the island, the officers smiling at the places we showed them we had been and nodding approvingly, we ate lunch on the stairs of the ruined church then paddled around the point leaving behind the Bahia Damas.

Looking for a beach we could have a fresh water stream to bath in, we found a great pebbly beach with two streams. We were ecstatic as, though it wasn’t your picture postcard beach, it meant no sand and an ability to wash the sand and salt of all we had. Oh heaven. Digging a big pit in the gravel beach were the stream flowed to the ocean, we had a basin to wash gear and ourselves in. very nice. Quickly the trees and beach became strewn with rinsed and refreshed gear and bodies, oh how nice it was to have no sand all through our gear Ahhh. That night we fall asleep clean and smelling sweet on non salty sleeping mats and there were NO bugs again or Hermit Crabs. 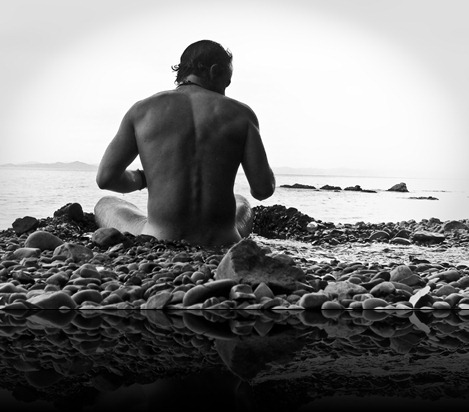