Labrador 2012; A journey to a new frontier 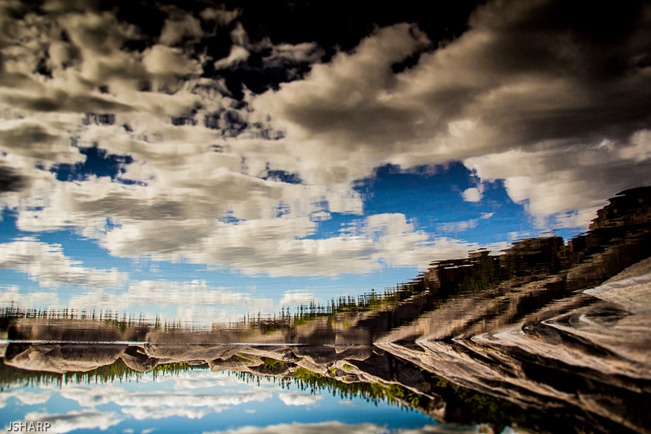 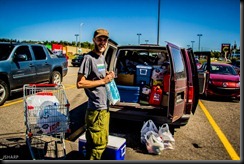 A $1000 dollar used GMC Safari, a temporary car use permit, $2300 dollars worth of food and supplies, 50 litres of extra fuel, and 2500 km’s between Ottawa, Ontario and Happy Valley Goose Bay, Labrador. I and fellow Team member Graham are to Drive, in three

days, this distance with this unknown car in order to meet up with 3 others and then catch the coastal steamer “the Northern Ranger”, for a 3 day journey north to Naine, from where we then load up a Twin Otter plane and head inland. 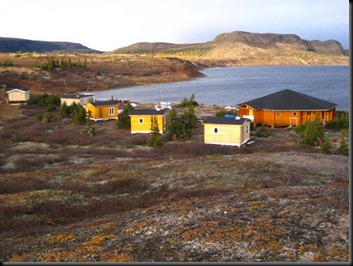 I have taken on a contract to help get a new project running in northern Labrador with a great character “Tundra Tom” and his company “Great Canadian Wilderness Adventures”; the budget is low, the product is huge, the adventure grand. Myself and four others (Including Tundra Tom) have a week to clean up and get running, a small operation at, a half built eco-lodge on the shores of Mistastin Lake (a lake created by an old meteor Impact crater), near the Border of Quebec and Labrador. The” Kamestastin Eco-Lodge” is an indigenous operated project of the “Tshikapisk Foundation”, and was started in the winter of 2000/2001 when 3 large military Hercules planes, air dropped all building supplies onto the lake. Over the years the lodge buildings have been erected though the lodge has never been truly finished or become commercially fully operational. Our operation will become one of the first and will possibly decide the direction the Foundation will take from now on with the future of the lodge.

I write this post in the Lounge of “The Northern Ranger”, we are a day delayed due to engine problems and await a technician (who arrived sometime in the night this morning) to fix the engine and get us underway by 12 noon today, which is 20 minutes away. Obviously Graham and I made the long arduous car drive from Ottawa (once I picked him up there after driving from Toronto First) to Goose bay. We had a fun journey with no mechanical issues with the vehicle I had purchased for Tundra Tom the day before leaving, though obviously the chance was high. 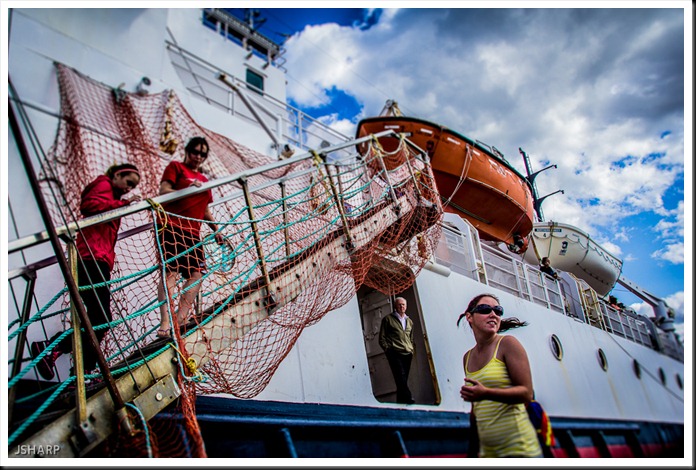 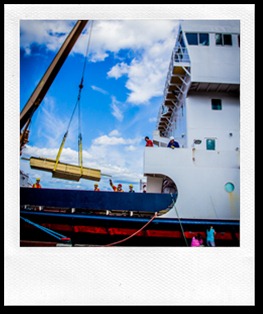 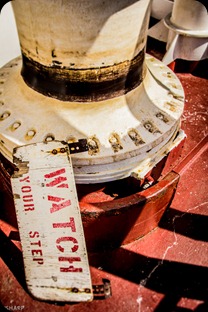 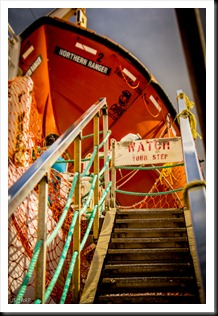 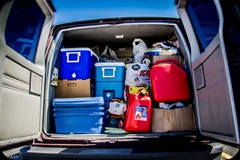 Graham and I had purchased and loaded equipment and food, from Cost-Co, Walmart and Canadian tire, into the back of the small van (this 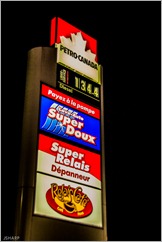 was due to the lack of and high expense of produce in Goose bay) and then driven through the rest of Ontario, into the French speaking province of Quebec , where we had fun communicating with the locals and truly felt like we were in a completely different country. Then after meandering through stunted pine and muskeg swamps, on lumpy, bumpy, humpy, gravely, dusty roads full of pot holes, we pulled into Labrador City, Labrador the morning before we needed to board the Northern Ranger. It was still 7 more hours to goose bay, along slightly better roads, we purchased the last supplies here, fuelled up and headed into the wild Labrador Plateau, which is spattered with lakes, muskeg and Boreal Forest as far as the eye can see. Along the way we also passed numerous large hydro electric dams, that lit up the night like giant amusement parks of sorts. 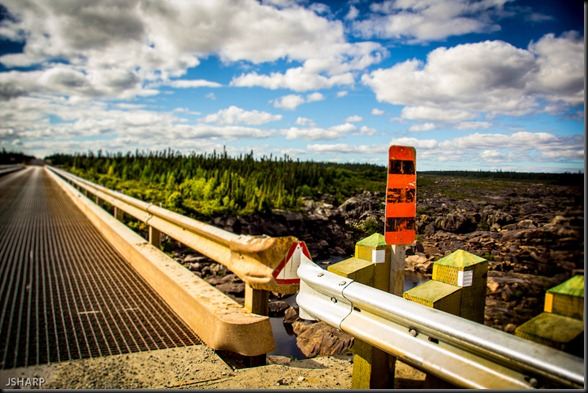 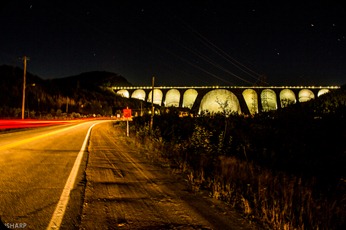 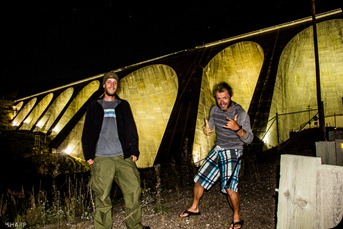 During the Journey we had taken turns driving , and had slept two nights in a tent, once in Quebec in a park, and the second still in Quebec but up in the boreal forest before the Labrador/Quebec provincial border. The Drive had been fun, and we had seen a lot, though now we were ready to finish. The last 2 hours were the gem of the drive. We drove along the windy narrow road, that dissected a small line through the immense expanse of the Labrador wild, then dropped off the edge of the plateau (2000 feet above sea level) into the valleys below. The expansive view of the lower areas above was gorgeous, deep hues of green aglow in the setting light of the sun, contrasted by the deep steely blues of the lakes and rivers here and there. The trees also suddenly grew in height, leaving the stunted alpine boreal forest behind; we were suddenly engulfed by large Birch and spruce trees towering above the road. 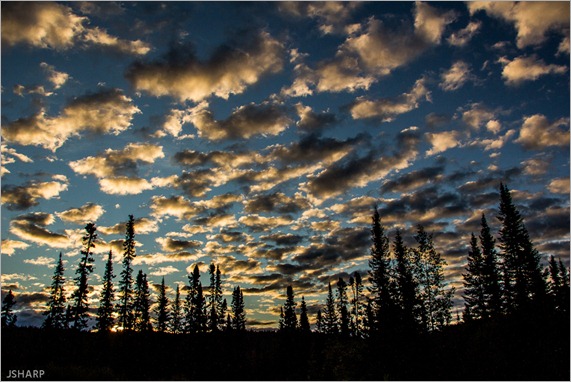 We arrived at 7.30 pm, just in time for dinner, and to meet the Team, Dan a biologist from Newfoundland, Adele a photographer from Chilliwack BC, Tundra Tom, Graham a farmer’s son form Saskatchewan, and me. We have all had a good time bonding, sharing hotel rooms and now a ships birth. Due to the failure to leave last night we all decided to celebrate our new friendship and “Labour Day” by drink a load of beer and playing

We will hopefully be leaving today, two days no after arriving in Goose bay, though it is now 12.15 pm and there is no sign that the boat is fixed and ready to go..... my next update will probably be in a month’s time when we return from the far north of Labrador, or perhaps it will be again tonight if we are not underway. 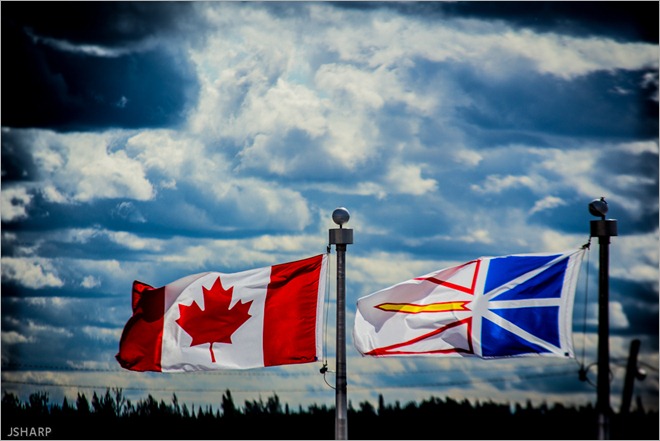