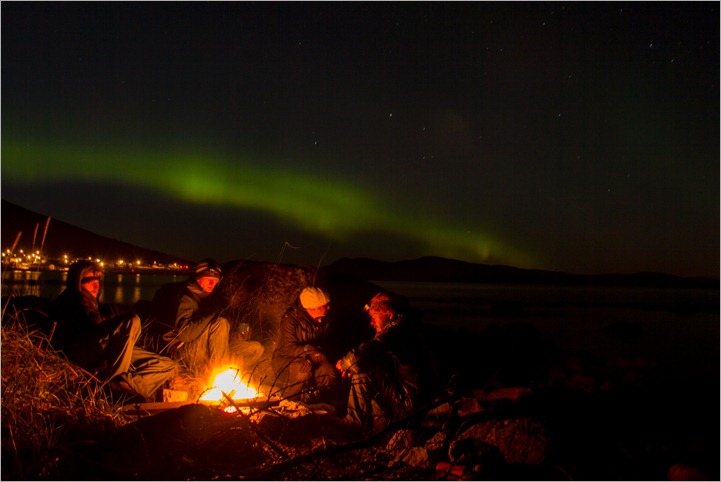 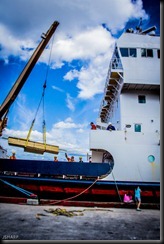 OK..... so..... since I last wrote we have had a great adventure in the wilds of Labrador, the Coastal steamer, ended up being completely broken and was put out of commission for at least 6 weeks. The whole issue ended up all over the news and our crew was even seen on TV while the Boss was interviewed on CBC radio. With our gear now stranded in goose bay, the ferry company paid for us to fly onward to Nain that night. Originally we were told to only bring 25lbs with us on the flight, though we complained and managed to wrangle about 110lbs instead (this was needed as we had to camp out in Nain for a week until the gear came up the coast on the freighter boat the following week). 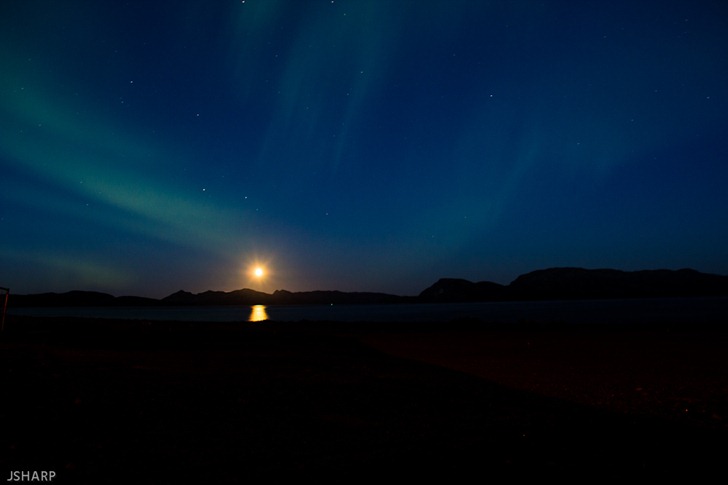 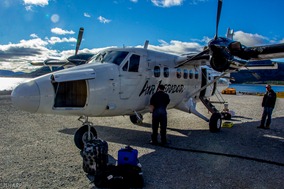 We landed in Nain just before sunset and unloaded all our gear, we were then soon meet by Dan’s Friends from Newfoundland Jamie and Jennie on their Quad bike . Jamie worked in Nain as a government Archaeologist and his wife Jennie was originally form Nain and worked as a teacher here. They helped us move our gear out to a point in the bay we could camp at with the Quad, and under the light of the most spectacular Northern lights display I have ever seen (and any one in Nain could remember) we set up our makes shift camp. The night was biting cold and the sky crystal clear, we sat around the Fire and enjoyed the tail end of the Northern lights display before falling asleep. In the morning we discovered ourselves on the shores of stunning bay, ringed by barren and often cliffy shores. We were on the far side out of town next to a fresh water stream where we sourced our water from, and we had an old fishing boat to hide our food under (from the supposed numerous Black bears in town, though we never encountered a single one). 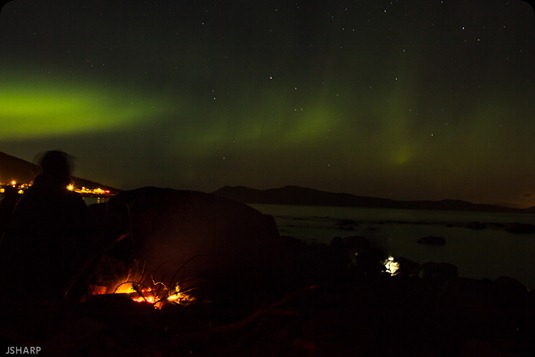 The next few days were a balance of finding out info on our gear coming up, meeting new people, organising transport for when our gear arrived to get it to the airport, staying in camp to keep an eye on our gear, using the free internet at the local Hotel and learning all we could about this intriguing Inuit town. Labrador has to distinct native races, the Innu and the Inuit. The Innu are the first Nations people derived from the Maritime Archaic Indians who came to this place some 8,000 years ago from the south, while the Inuit appeared some 2000 years ago as the Dorset people and then again 300 years ago as the Thule people, both crossed the Bearing sea from Eurasia to settle across the arctic of north America all the way to Greenland. This leads to interesting aboriginal politics in the area, though creates a wonderfully interesting history and culture to the area alongside the European modern history to the area. 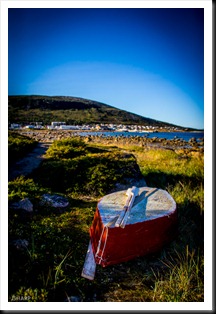 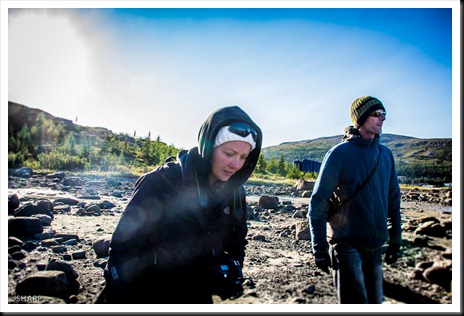 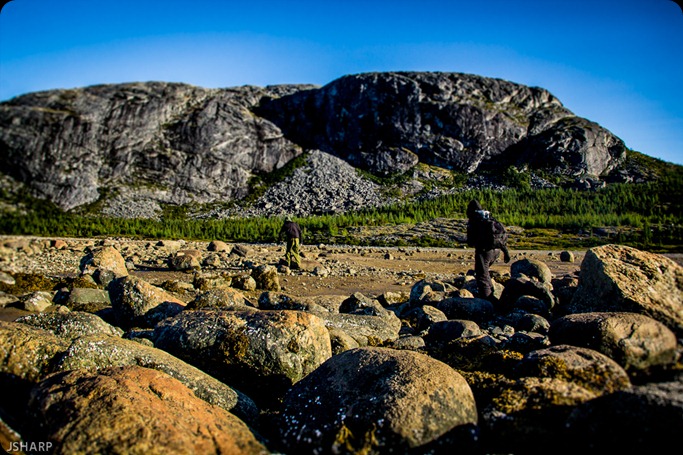 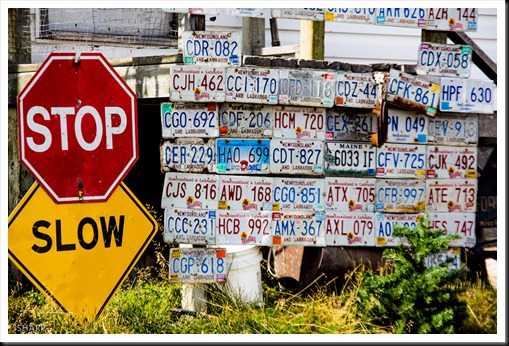 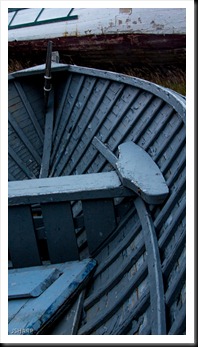 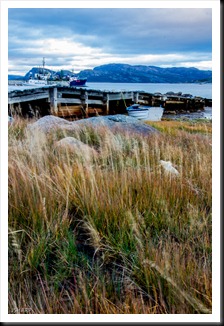 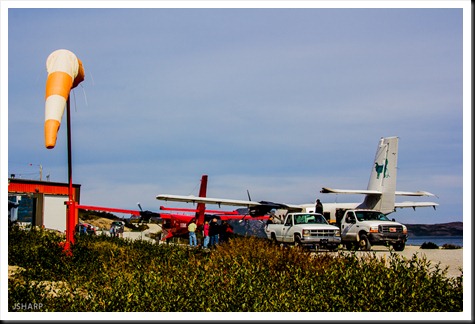 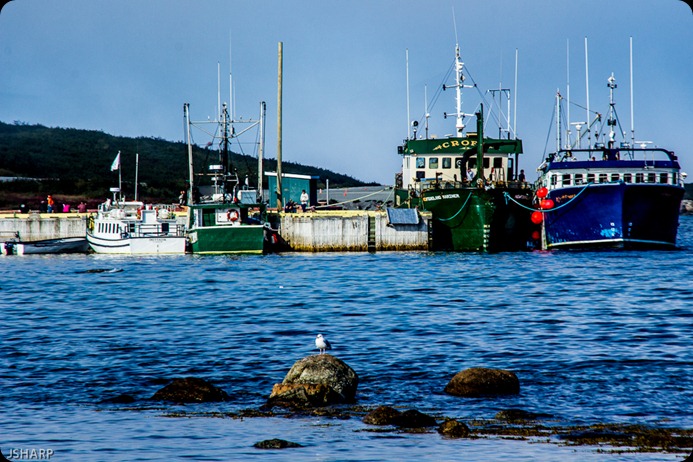 Our week in Nain was filled with meeting interesting people, from Brian the Australian who has lived in Nain for 30 odd years, to Toby the Local jewellery maker and beer lover, as well as an assortment of local workers for various government agents. Who have interesting ties to the community and the way tourism has, can and will change in northern Labrador. We even had a caribou Meal at Jennie and Jamie’s as well, Delicious.

Things got rolling a bit more again when the big boss Tom fly in a few days later with his dog Girlie. We then soon moved into a house for three nights, saying goodbye to campfires on the beach and northern lights in the sky, However this was good as a bad weather system settled in and it rained every day until we flew out with all our gear to Mestastin Lake (or in the Innu language “Kamestastin”) 4 days later. Our freight finally turned up on the Astron (the freighter ship that serves the coast) at midnight the night before we were due to fly out. We had postponed our flight to the lake by over week and this now meant we only had 3 full days to prepare camp (instead of almost 2 weeks) before the clients arrived out there. We were really flying by the set of our pants now however things were coming together slowly, after so many things going wrong, the tide of fortune was starting to turn. 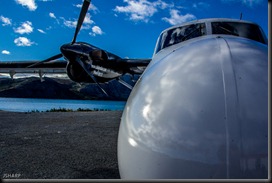 On Sept 11th we loaded up a Twin Otter airplane with 3000lbs of gear, clothing, food and people and took flight to Kamestastin Lake. The fall colours of the tundra glowed below us, as we looked from our windows at the lake speckled landscape below. We were finally on our way to the wilds of Labrador and, hopefully numerous Caribou.