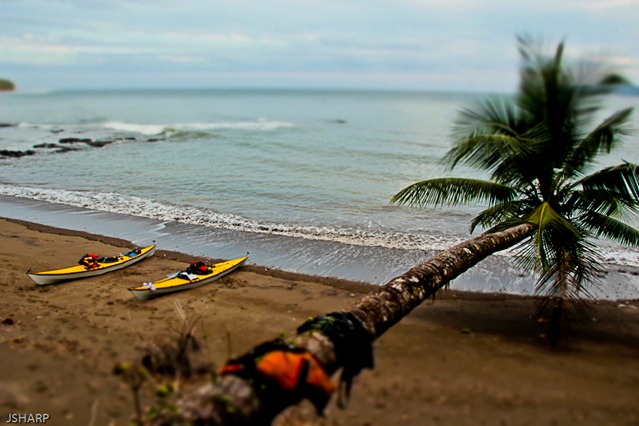 Weather: Sunny and Hot with a Light Sea Breeze

I awake to a golden light creating the western point of our little cove we camp onto glow, macaws croak in the canopy accompanied by the rough bark of a Tiger Heron. We arrived at this camp last night after an Epic Day of paddling yesterday, Up in the dark to break camp we were on the water at first light. It was magical to paddle in the cool air and watch the sun come up over time, backlighting the jungle canopy of the undulating Islandscape into a multi shaded image of steamy trees, with surging wave beat cliffs. This island is truly a gem. 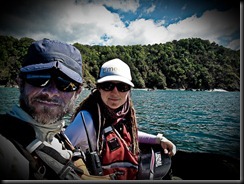 Allie was determined today, she had that look of someone who meant business, our pace was solid in the cool morning, and remained so once the sun was directly on us and the morning heat began. Rounding the first big headland we were met by slightly messy heaving seas as the swell refracted of the cliffs; the TRAK handled it well even though fully loaded. Turning the corner South around the headland we were presented with a bizarre stark coastline of gentle cliffs curving high up to forest crested heights, large beautiful beaches were still found with surf churning and just off the coast were scattered little weird shaped islands. Like something out of a Doctor Zeus book the islands were twisted and weather beaten to bizarre shapes, one had a great sea arch we paddled through with the heaving seas. 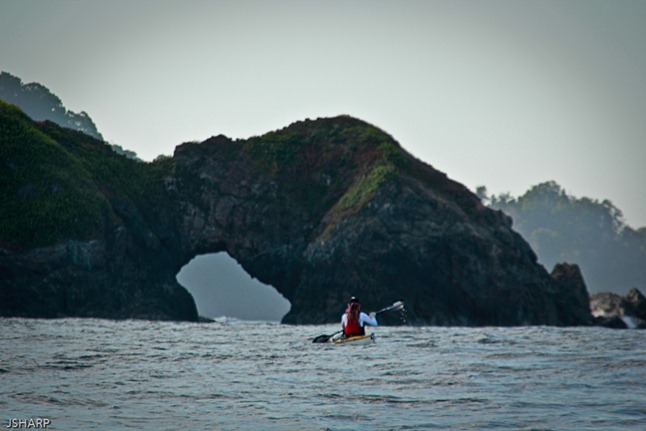 Attempting to get the most out of the day we passed up a great looking beach at 10 am in order to push on for another hour passing our next head land 40 mins later we discovered a coast of just cliffs; pocket beaches with no shade existed for as far as the eye could see. This presented a choice; Do we push on or do we go back to the last good beach with shade. This was Allie’s choice, she was hot, feeling nauseous and was telling me she was dry retching, Despite all this she quickly chose to go on. “ I am determined to push myself and snot stay within my comfort zone” she stated to me. On the chart we could see a river coming out to some flat land about an hour and a half paddle, we were going for it. 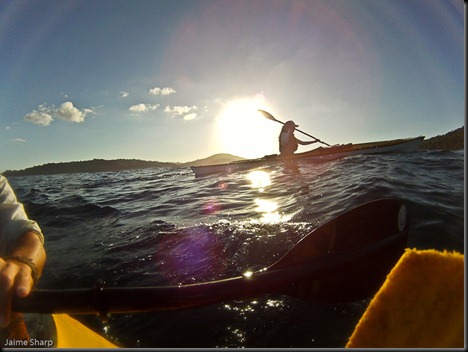 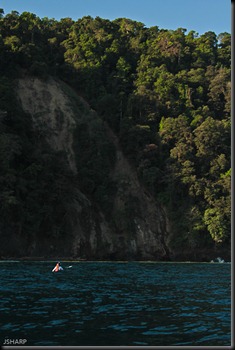 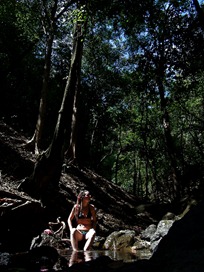 1pm we round a bend a there are beaches, we come through the surf onto a great little patch of crescent sand; Allie miss-times and wave and ends up swimming, thank goodness for the seasock in the TRAK, I wade out lift the nose empty the boat and drag it in. hardly a drop of water got inside the interior of the boat after a full swamping in small surf. The beach has wonderful shade and at the far end a great stony creek with a big pool to swim in and cool off. We eat a pineapple and some fish for lunch, I refill our drinking water from the creek (treating it off course). Three hours later we look at leaving, Allie watches the surf break amongst the rocks to look for a pattern. “ Holy!” she barks. “ could there be a crocodile swimming in the surf?” she asked me with an incredulous look. I was thinking yes, though probably not; “it is probably a big fish, there were a bunch in the surf when we paddled in!” though we both looked for awhile but nothing showed. 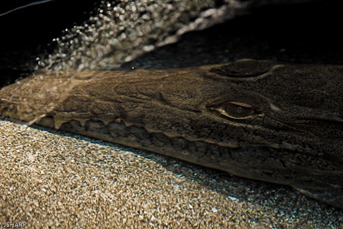 Lunching out through the surf Allie got in the surge Zone first and As I came out to meet her and wait for a break in the waves, Allie came paddling over to me with nervous excitement. “ I WAS RIGHT!” she exclaimed with a smile “ There is a F@#*ing Croc in the surf, it came right up and looked at me!”, I was excited by this I love Crocs. “Look there it is!” looking out at the small breaking waves there was the unmistakable dark outline of a crocodile amongst the surge, its long tooth filled mouth attached to a head held slightly above the water in turn followed by a slender scaly back with an elegant spiked tail trailing behind about 2 meters in total length. It swam around a distance off checking us out and then disappeared as a gap in the waves appeared and we paddled out. “ Well, now that is a different issue to be dealing with when breaking out through the surf” I stated and we both chuckled. We were now aiming for another beach about an hour and a half further down, now with some good distance covered today we would find a place to spend two nights and relax a bit. Allie had finally unlocked her distance paddler and realized the rewards of pushing yourself out weigh the discomfort of it all (today was the longest time Allie had ever spent in a kayak and it was in turn the longest distance she had paddled to date). 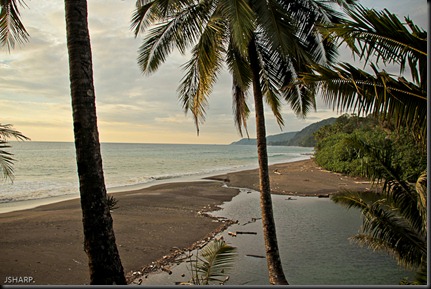 7 scarlet Macaws feed on the beach while next to them a small crocodile slowly slid in to the surf, just behind the breaking waves to gringos in yellow folding kayaks watched. “Were not camping there” Allie laughed. The beach didn’t look two inviting despite the crocs and even with the bright red Parrots. This stretch obviously got the snot kicked out of it in the winter storms as the trees looked raggedy struggling to hold onto the beach that remained though there was fresh water here. We chose to paddle around the small headland and found a little cove protected from the surf and easy paddle to the river and Crocs for our day off tomorrow, and the Macaws still flew about us on this side as well.

That night we made a delicious cinnamon raisin bread on the fire and enjoyed the stars, there were a few biting insects (hardly any are on this island) and the Terrestrial hermit crabs were as busy as ever cleaning up the beach and trying to leave whatever food we left un attended and we fell asleep to the rustle and clink of their movements about our tent an kitchen as they cleaned up our scraps.